I would like to introduce my friends over at “Jamaicanitpaleo!”  They did a guest recipe for me and I am so excited to try this stew out. It looks amazing! 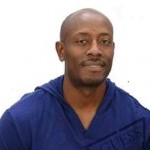 Jamaican It Paleo is a new website ran by a husband and father named Alex who created it along with his wife to originally chronicle their family’s recipes for their children.  When his wife had to make some dietary changes, due to her health, they decided to make the focus of his cuisine the focus of her new found paleo way of eating and living.  Originally from Kingston, Jamaica and a US transplant, he was amazed at the way of eating and living in his new country.  Jamaican It Paleo seems like a catchy phrase, but honestly, in Jamaica, they don’t do paleo…they just eat real food…and they COOK! In Jamaica, they love, they work, they cook and they eat—it’s that simple.  Jamaican It Paleo is combination of food, culture and simple living tips about family, money, wellness and organization.  It’s a “likkle-bit-of-dis-an’-a-likkle-bit-of-dat”.  Above all, Jamaican It Paleo seeks to inspire others to live a more simple and delicious life.

Some of us call this stew chicken and others call it brown stew chicken.  Either way, it is chicken (usually dark meat) ‘stewed’ in a rich gravy made from its own juices and the seasonings.  Many of us use a whole chicken too and cut it into smaller pieces to cook with this recipe, but for ease of preparation, we usually will use some thighs or legs.  Us Jamaicans have to season our meat before cooking it and we won’t settle for nothing less.  My wife likes to meal plan and she helps with making sure that we know what we are cooking and defrosting so we can marinate or ‘season the meat’ at least overnight.   If you are not as organized and do not have time, you can give it at least 1 hour to season.  If you haven’t ‘stewed’ meat before, you need to try it.  Check out more information on our stewing page for that.  You can really make this dish spicy if you mince up the scotch bonnet pepper (aka-habanero pepper), but we chose to leave it whole to make it less spicy. Check it out!

For this recipe, we used our dutch oven, chef’s knife, cutting board, and silicone spatula and brush set. 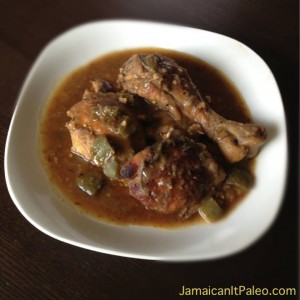 1. Gather the onion, bell pepper, garlic, ginger and scallion and get them ready to chop. 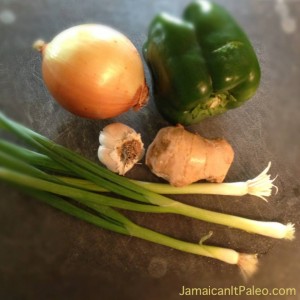 2. Chop all of the vegetables and get them ready for the marinade or to “season the meat”. 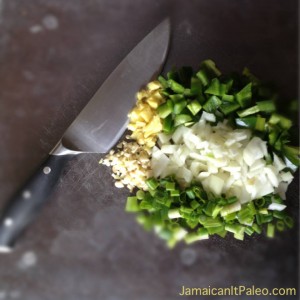 3. Season the chicken by rubbing in salt, pepper, coconut aminos, thyme, onion, scallion, peppers, garlic, and ginger and allow it to marinade for 1 hour or overnight in the fridge. 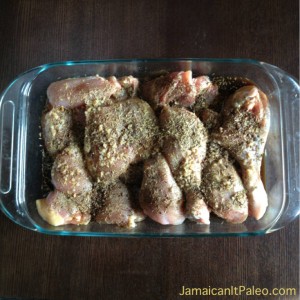 4. Add the cut up vegetables to the chicken and allow it to marinade for at least 2 hours or in the fridge overnight. 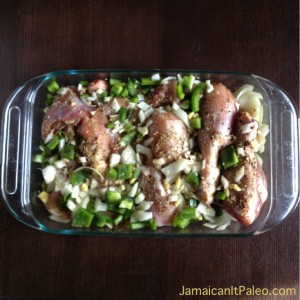 5. Heat the oil in the Dutch oven on high heat and when it is ‘screaming hot’, remove only the chicken to fry in the oil and leave behind the vegetable marinade. 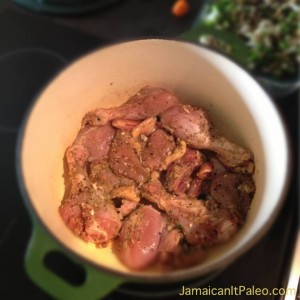 6.  Cover the pot and allow the chicken to brown on one side for about 5 minutes (leave covered). 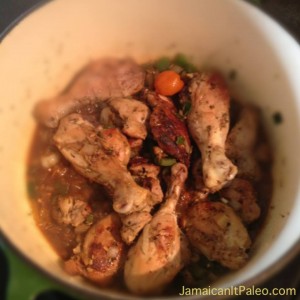 7. Uncover after 5 minutes and brown on the other side, add the remaining vegetable marinade, the whole scotch bonnet pepper, cover and cook on medium high heat for 20 minutes. 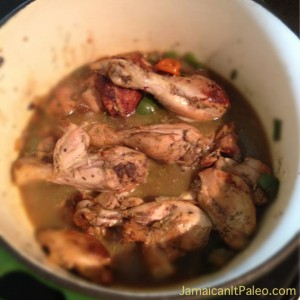 8.  After 2o minutes, add the water and let simmer for another 10 minutes or until the gravy thickens. 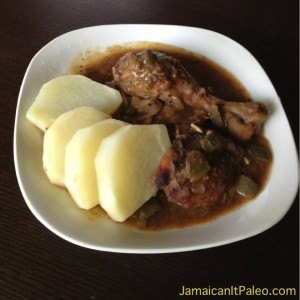 For more recipes like this, visit www.jamaicanitpaleo.com and for updates, free recipes, meal plans and more, like us on FB at www.facebook.com/jamaicanitpaleo.